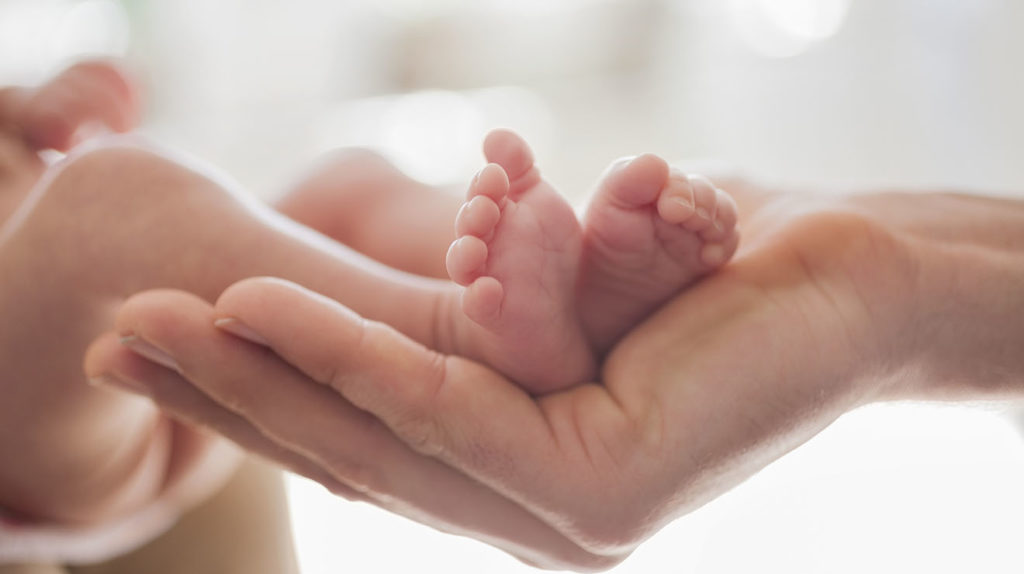 But at 21, I made the decision to lose weight for myself. I lost 90 pounds on my own and kept it off. In that same year, I met the man who would become my husband.

During our courtship, the weight slowly crept back on. He gained as well. We both worked demanding jobs and finding a balance was difficult.

After two years of marriage while in our late 20s, we were ready for a baby. But after trying for two years, we weren’t successful. After an appointment with Fertility Centers of Illinois, I learned that I have hypothyroidism, a condition where the thyroid is under-active, causing the metabolism to nosedive. I also learned that I had Polycystic Ovary Syndrome, a hormonal disorder causing ovaries to enlarge and grow cysts.

Receiving the diagnosis brought clarity to my weight issue, and the medication I was given helped prepare my body for a pregnancy. Next, I began medication for an Intrauterine Insemination cycle. The first cycle didn’t result in a pregnancy, and neither did the second.

On the third IUI, I became pregnant with my son. My pregnancy was a dream — I didn’t have any complications, not even morning sickness. Our son Ben was a dream come true.

When Ben turned three, we decided to try for another baby. I hadn’t been on any birth control since his birth, so we made the decision to see Dr. Laurence Jacobs. We didn’t know it then, but what lay ahead would be very long road and very different than the treatment process of having Ben.

After undergoing fertility testing, we learned that my husband had sperm issues. He went on Theralogix, a nutritional based supplement to improve his sperm health. Dr. Jacobs gave us the green light to move forward with treatment. After four failed attempts of IUI, we made the switch to in vitro fertilization. The cycle resulted in four embryos, only two of which were healthy enough to do a transfer. There was no pregnancy.

Later in the year we did another IVF cycle, which resulted in seven embryos. We transferred two and froze the remaining five, but did not become pregnant. We were devastated. Financially and emotionally, we needed to step away and revisit later.

The next year, we transferred two frozen embryos and were overjoyed to learn that we had twins. A couple of weeks later it was discovered that one egg had split — I was carrying triplets.

I was 36 years old, carrying a multiple pregnancy and not at a healthy weight. During our consultation with Dr. Jacobs, he let us know that the likelihood of carrying the babies to term was very small. Due to complications, I lost the pregnancy at 22 weeks.

I completely blamed myself. Had I been at a healthy weight, would my body have been able to carry the pregnancy longer? Could I have delivered healthy babies?

I was at my lowest point and cried all the time. I would hold it together until I got my son on the bus in the morning, then I would cry on the couch until I had to pull it together before he came home from school. This went on for weeks. Then one day something shifted — I saw that I had a choice. I could cry on the couch or I could get up and do everything I could to make sure that if there was going to be a “next time” I would be ready.

From that point, I made the decision to be healthy.

It was hard to push past the anxiety of going to the gym and feeling like all those eyes were on me, but I kept going. I worked out six days a week for an hour and a half every day. My diet was reduced to 1200 calories a day that included 30 grams of fat, fresh fruits, protein, and vegetables. Only whole foods, no junk and no high-starch foods.

After six weeks of hard work, I hadn’t lost any weight. I had gained one pound.

Scouring the internet for information, I learned that with PCOS this was normal. I decided not to give up and to keep going. After two months of my routine, I started losing two to seven lbs. per week. I kept it up as the weeks passed, and religiously performed weekly weigh-ins and measurements.

It took nine months and a lot of hard work and sacrifice, but I lost 120 pounds.

Once I had achieved my goal, we decided to move forward with the three remaining frozen embryos, transferring one embryo at a time. We transferred the last embryo with hope in November 2013. We did not achieve a pregnancy. Then I endured another devastating blow when I lost my father. I was heartbroken.

We were ready to give up. During my consult with Dr. Jacobs, he mentioned a new test that he thought could help us.  He felt it was worth it for us to give it one more try. The Endometrial Receptivity Array Test helps assess the best time to transfer an embryo in order to increase the odds of the embryo implanting to the uterine wall. The cost of the test was $850 plus the cost of medication, the endometrial biopsy, and medical visits.

According to Dr. Jacobs, in a natural cycle the endometrium is receptive to the implantation of embryos between days 19 and 21 of the menstrual cycle (five to seven days post ovulation). However, if the endometrium is not receptive during this time frame, the embryo may be ‘out of sync’ with the uterine lining and transferred at the wrong time during IVF, missing the fertility window of implantation.

To do the test, I went through a mock IVF transfer cycle. I completed the medication protocol but did not have an embryo transferred.  At the end of the cycle, uterine scratching is performed and then tested to determine if the uterine lining is favorable for implantation.

The usual protocol for IVF is to do an embryo transfer at five days. But roughly 25 percent of women are not ready for an embryo transfer on that day. By doing the ERA test, we learned that I was one of those women. I would need a day six transfer.

We knew we would not be able to do a fresh transfer as all embryos must be frozen after day five, but we felt empowered with this new information. But there was another side of the coin that had yet to be evaluated — what was the quality of our embryos?

We participated in an FCI study with the EEVA Scope, which uses time-lapse imaging to assess early embryo development. Reviewing the images, embryologists are able to select the healthiest embryos for transfer.

We went into the next cycle confident that with these two tests supporting us, we were sure to be successful. The cycle resulted in four embryos. The first embryo transfer did not result in a pregnancy. But after the next cycle, we learned I was pregnant.

I was afraid I would lose the baby during the entire pregnancy. But near the end, I was able to relax.

On April 27th, Joshua was born. Ben, who is almost eight years old, now has the sibling he has been longing for.

If you are reading this and on your fertility journey, know that I am sharing my story to give you hope. I know that it is tough. It is a struggle, and the road can seem very long. Fertility treatment will take its toll; emotionally, financially, and in ways you aren’t prepared for. It is a tremendous weight to shoulder for sure. You may not even realize the weight of what you are carrying with you right now. But the day you are holding your newborn baby, all of that goes away.

Don’t give up too soon. I was lucky enough to have the best fertility doctor and when I could no longer go on and see that it could happen, he could see that for me. He gave me hope when I didn’t have it. We are so grateful for Dr. Jacobs. His knowledge, care, and compassion made it possible for us to finally have our sweet baby Joshua.